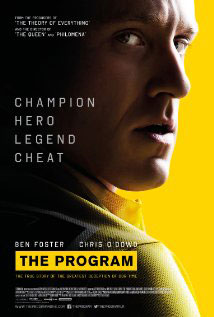 THE PROGRAM is a fast paced account of the recent life and crimes of the professional cyclist Lance Armstrong. This story has been well documented in the British mainstream media but what makes this film so engaging is that Frears depicts the American from a human point of view. That is not to say that he is an apologist for the former cyclist but more a good story teller in providing an insight into ambition, need, desire and mind blind addiction. In Armstrong’s case, his addiction was the need to be perceived as number one, first! A product of an era where ‘if you can get away with it’, its justified!!

One of the terrific lines in the film comes from the journalist who was tracking Armstrong’s meteoric rise to Tour de France champion, David Walsh of The Sunday Times. He makes reference to the fact if we (the public) applaud loud enough, it (cheating) is ok. An analogy that applies to our Governments, our knighted and our authorities. In fact another clever theme in THE PROGRAM is how the revelations about Armstrong’s misdeeds come into the public domain via trial by media’s THE OPRAH WINFREY SHOW confession. This begs the question:

“Who are our Government, judges and law enforcement officers?”

In fact the only time you notice a lawyer in this film, it is to demonise the journalist David Walsh, in trying to bring light to a farce. In that sense, Armstrong is a victim of our times, where most people don’t get called out. Most people are not interested in truth or justice. That is not the program. The program is by any means necessary and for as long as you don’t get caught, you are righteous! One of the oft repeated claims by Armstrong being:

With great performances from Ben Foster and Chris O’ Dowd, THE PROGRAM is a human story about being the best we can be. But this measurement can only be ascertained by the individual itself, not by others. When you have to live with yourself, there is no hiding place.