The Call Of The Wild – Film Review

The film was released to coincide with School’s half term and so is clearly tailored for children also. Telling the story of Buck, a St. Bernard-Scotch collie dog mix. Using the technique of voice over, Harrison Ford narrates to give us a perspective of Buck – stolen, starved and ill treated, Buck trains hard as a sled dog since man had found the yellow metal and were embarking upon the frozen north wilderness to find more of it. With strong muscle for toil and hair to protect from the blistering cold, Buck exemplifies the attributes required for such adventure. Despite his hard working efforts and empathy for those around him, Buck forges a rivalry with the lead dog – a beautiful husky called Spitz and this leads to a violent confrontation culminating in Buck succeeding Spitz to lead the pack. It is during this time that Buck senses the presence, almost apparition like, of an apex predator, silhouetted in his sights, but almost calling him to be his primal self. 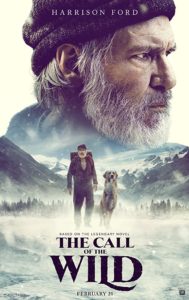 The Call of the Wild poster

This encourages Buck to be more courageous and daring and he uses this ‘calling’ to save the life of one of his masters when she falls into the iced water. This develops a bond between dog and man, but such is Buck’s luck, he is taken away from this family environment and has to work for an awfully cruel master seeking wealth from the region without any care or thought for others. Having a good nature against a man with a club is a characteristic flaw and it is something Buck picks up on when he is confronted with almost certain death against such cruelty.

Only the intervention of the avuncular John Thornton, played by Harrison Ford, prevents such a calamity. The final act between John and Buck is reminiscent of a good parent and child. The child with all the love in the World, must be allowed to be set free and independent, and this is Buck’s calling.

The film may gloss over some of Jack London’s adult themes of morality, ruthlessness and survival, but it still encapsulates the impact of violence metamorphosing any animal into a raging fiend. To be jerked from civilisation into something primordial can result in a dangerous cocktail of an emotional deathless hatred. But the film is still a beautifully told tale and the CGI is expertly done. A family film derived from a literary masterclass piece of writing.