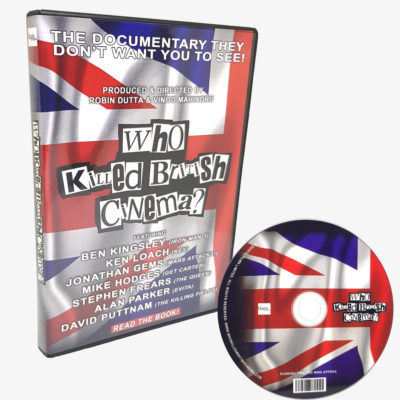 You can also buy from Amazon – please leave a review.

Synopsis: A feature length documentary about the real state of the British film industry in relation to UK structures past, present and currently for the future. This film exposes the shocking truths about the UK Governments’ will to grow an indigenous British film industry, the legacy and testament of the now closed UK Film Council (UKFC), the current British Film Institute and the new Creative England.

Purely in respect of the public money spent, this film challenges the notion that art is unquantifiable, highlights the question of the ‘jobs for the boys’ culture that exists in Britain, and questions the importance of a sustainable indigenous film culture that truly reflects Britain and which can be sold all over the World.

As you may have noticed this item is also sold via Amazon, with Amazons own production and distribution service from the USA. If you are based in the USA you may have a faster delivery with cheaper shipping costs and if you are a Amazon Prime customer delivery may also be free.