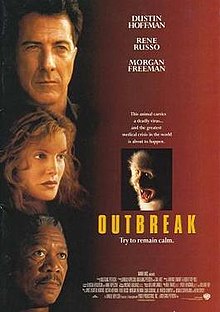 When the film CONTAGION was recently broadcast on ITV2, I was surprised to hear it had been received with a number of complaints from viewers who felt further scared by the subject matter. Unlike when I was growing up when there was only 3 terrestrial channels to choose from, what I did not understand from the moaners was why they did not choose something else to watch? In 2015 Bill Gates gave a lecture suggesting that the biggest World threat was neither nuclear war or terrorism, but a potential future pandemic after the Ebola crisis. Was he scare mongering too?

So, my film of the month is OUTBREAK. Available on Netflix. Producing films which enlighten while they entertain has always been a moviemaking priority for Oscar winning producer Arnold Kopelson who also produced PLATOON and FALLING DOWN. The film’s director, Wolfgang Petersen, said “This film should haunt you. It should sit with you for quite a while, because it touches a nerve. I’d like for people to think maybe we shouldn’t be fooling with nature too much “. 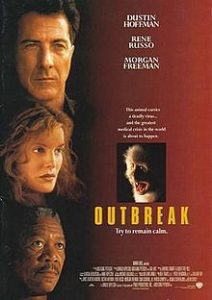 Colonel Sam Daniels, played by Dustin Hoffman has been dispatched by General Billy Ford, played by Morgan Freeman, to investigate an outbreak of a hot virus in the dense African rainforest. Sam concludes that the killer virus is capable of spreading to the United States if it hasn’t already! He warns his superior officers to place his country on alert and also advises his ex-wife Dr Roberta “Robby” Keough, played by Renne Russo, who works for the Centres for Disease Control and Prevention. But something as crooked as the hooded claw appears to be in place when Sam is suddenly taken off his investigative duties and the race to find a vaccine is further threatened by one of the nation’s highest – ranking military officers General McClintock, played by Donald Sutherland who vows not to let the virus secret history out at any cost !

When you think that it is almost forty years since the auto immune deficiency syndrome outbreak and yet we still do not have an anti-viral serum for the AIDS virus today, OUTBREAK is both a pertinent and timely watch. With a great supporting cast which includes Cuba Gooding JR, Patrick Dempsey and Kevin Spacey. Check it out with the following famous quote from Thomas Paine:

“God, give me strength to face a fact, even though it slays me”