Norman: The Moderate Rise and Tragic Fall of a New York Fixer Review 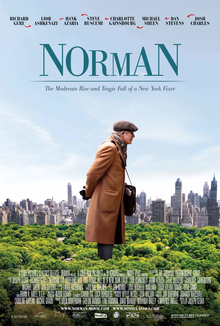 NORMAN-THE MODERATE RISE AND TRAGIC FALL OF A NEW YORK FIXER is played by Richard Gere. A four act story with a supporting cast of Michael Sheen, Steve Buscemi, Charlotte Gainsbourg and Harris Yulin. Norman is a likeable but sad Woody Allen type character desperate to bridge deals between two parties of high financial prospects for a brokerage fee. His actions and antics belie an almost schizoid personality and it is this weakness of will and desire that summon a bond between him and the then future Prime Minister of Israel. But when  three years later this Prime Minister threatens elitist governance by trying to bring peace in his region, invisible forces move to discredit him by associating him with the shambolic Norman.

Another interesting aspect to this movie is that it is essentially an Israeli film co financed with the USA. And just like the last Israeli film I saw at the cinema WALTZ WITH BASHIR, both films are political, heartfelt and redeeming. We have all encountered characters like Norman: name dropping opportunistic invaders of private space and time. Yet the film does a great job in allowing us to see Norman in another light and so in the film, we side with Norman and feel empathy for his need to inflate his stock value among his own community.  You get the impression that Norman would rather lose his life than his face. But who is he? Where does he live? Does he have a family?

When history’s heroes are more often anonymous and great deeds and ideas left dormant, NORMAN is a great moral tale of a systemic broken system in today’s World order. Echoes of The Hutton Inquiry in what was a whitewash of facts, figures and reality given such a narrow remit. See it.

Written and Directed by Joseph Cedar 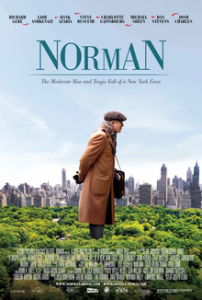