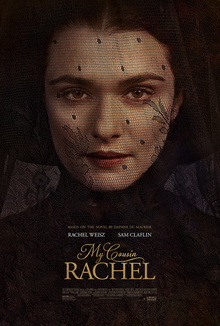 Based on Daphne Du Maurier’s ( The Birds, Rebecca, Don’t Look now ) 1951 novel, My Cousin Rachel stars Rachel Weisz, Sam Claflin, Holliday Grainger and Iain Glen in this period thriller set in the 19th Century. Phillip Ashley (Claflin) is an orphaned child raised by his lookalike cousin Ambrose who due to illness goes to Italy for a better climate. Here he falls in love and marries his cousin Rachel (Weisz) before succumbing to a tumour and untimely death which Phillip naturally investigates.

Upon his return to England, Phillip is aided by his family lawyer (Glenn) and his pretty daughter Louise (Grainger) in the inheritance of his surrogate father’s estate on the West Country coast to which Rachel comes to visit as part of her grieving process. She is taken aback at the extraordinary likeness of Phillip to Ambrose; while he, in his inexperience with relations with women having never acted upon his potential with Louise, becomes magnetised by Rachel’s smoulderingly deep beauty.

If you have ever had feelings for someone only to be told:

Then My Cousin Rachel will resonate in the intended way of keeping you unsettled in your responses to the characters and their actions. Dark, brooding and sexy!