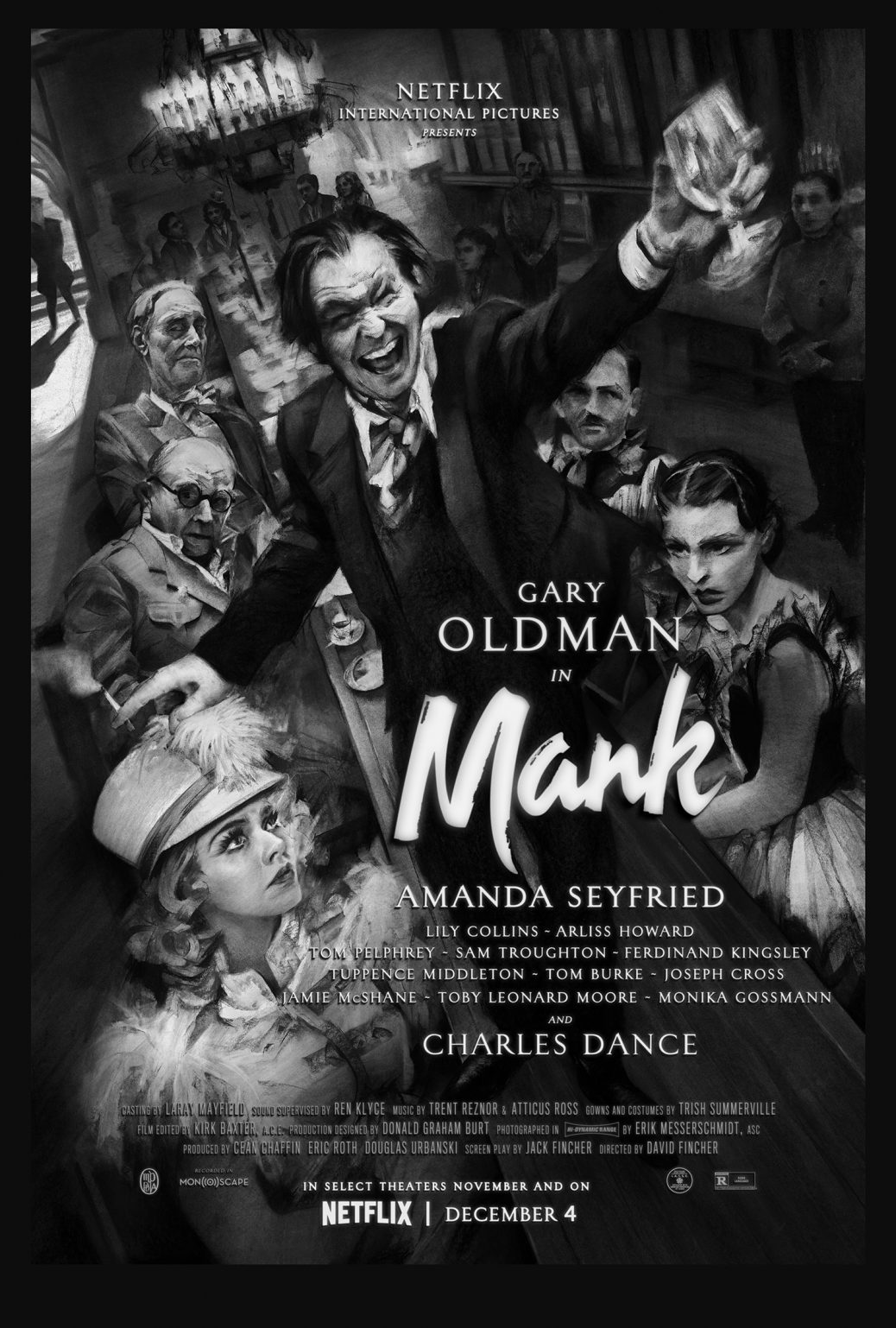 The depiction of Hollywood screenwriter Herman Mankiewicz played by Gary Oldman is one recovering from a car accident. He has problems with both alcohol and gambling but even with these demons, he is still able to integrate with others who like him and his witticisms. And one of his insights despite his own addictions is that that there is also decadence in accumulation and power. William Randolph Hearst was the Rupert Murdoch of his time and he is reflected in the fictional character of Charles Foster Kane from the 1941 film classic CITIZEN KANE. A cautionary tale about the American dream. Few have taken heed of the message in CITIZEN KANE when you review the likes of disgustingly rich men such as Harvey Weinstein or Jeffrey Epstein recently and so what Herman Mankiewicz observes is what most don’t see or have access to see. It is worth noting here that if you have not seen or know of the history behind CITIZEN KANE, then MANK might not make sense.

I enjoyed it. It was quite revealing for me to learn that it was Mankiewicz who had access to the Hearst inner circle and hence could reference him in his depiction of Charles Foster Kane. Pauline Kael amongst other film critics have written books suggesting that Mankiewicz should have been the sole writing credit for CITIZEN KANE which is officially shared between Herman Mankiewicz and Orson Welles. The film’s sole Academy Award came for its writing and so was shared between the two giants of cinema. I have not read any essays on who wrote CITIZEN KANE but agree with the possible sentiment that the writer in Hollywood has always been and possibly still is, an essential yet disregarded role in Studio film productions. I always remember Billy Wilder‘s excellent depiction of the treatment of the Hollywood writer in SUNSET BOULEVARD.

So did Orson Welles latch his name onto the screenplay without significant input? I don’t believe so. Would there be such controversy from Mankiewicz had the film flopped? Is there a draft of Herman’s original screenplay to cross reference with the final film? Here’s my guess crudely:

Remember that whilst the character of Kane is influenced by the references to Hearst, they are very much two different people in personality. So I think Welles’s input in the screenplay is equally valid. The director of MANK – David Fincher (SEVEN, THE SOCIAL NETWORK) , like all good film makers, loves Orson too much to be critical of him in character and the impression I had from watching this film is that Herman was undeniably the genesis of the idea in his writing but he was unwell and effectively convalescing during this time, so his original manuscript would have had input and changes on the studio floor without the presence of Mankiewicz and this is what I suspect Welles quite rightly takes credit for.

Orson Welles played by Tom Burke (brilliant voice) bookends this film and hence is conspicuously missing in representation. As a debutant film maker CITIZEN KANE was not his first choice. HEARTS OF DARKNESS was where he was steered and you can see some of his storyboards for this film idea at this time. But the Joseph Conrad story (much later adapted into APOCALYPSE NOW!) would have been too expensive for RKO who did not have a big back lot for exteriors unlike FOX or UNIVERSAL studios. So a film made almost entirely on a studio stage would have been cheaper by comparison and much less of a risk for this first time Director, especially as he had the unique ‘final cut’ contract engineered for him by his friend Nelson Rockefeller. So what we see in MANK is little to do with the CITIZEN KANE that was to become the greatest movie ever made. It’s more a portrait of what it was like to be a Hollywood screenwriter in the 1930s and 1940s. So many of the illuminating scenes are those away from the cerebral process of writing and shows the various parties, formal dinners and Hearst (Charles Dance) on set of his JOAN OF ARC (Amanda Seyfried as Marion Davies).

Seyfried could win the Oscar for best supporting actress since Hollywood loves self-reflective tales and there could be more for cinematography (Eric Messerschmidt) and production design (Donald Graham Burt and Jan Pascale). But otherwise this year’s Academy nods will be much more diverse. We’ll see. ref_=nm_knf_t1″> Who Killed British Cinema?  Book available from Amazon and stream it from Amazon Prime