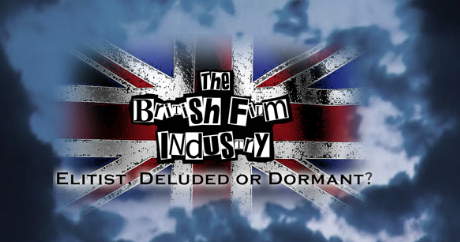 So all the rumours of elitism and cronyism within the British film industry are true as per the evidence introduced in the doc I saw at The Prince Charles Cinema recently.

Quota Film’s The British Film Industry: Elitist, Deluded or Dormant is an eye-opening look at this incestuous disease that is deep rooted in the British Film Industry. Let’s be honest it’s like any institution whether it is the Banks or the BBC and the cronyism at the top level keeping the top jobs within their gene pool.

And to think with all this talk of diversity and closing the class divide, the industry is at a low point for people who want an entry. Don’t take my word for it, many news articles are pretty much saying the same thing where the BAME and working class actors/ filmmakers are increasingly shut out. All the advances in the 80’s with Channel 4’s brave agenda have pretty much gone with television preferring safe programming which is why you won’t see many real ground breaking films.

One other not-very-surprising-in-hindsight issue is conflict of interest with some Regional Film Council heads diverting funds into THEIR OWN production companies. Isn’t that a teensy bit illegal? When one has a privileged position they shouldn’t be able to line their own pockets but then again why am I surprised? All these initiatives need overhauling and even with the demise of the Film Council and the BFI taking over, we shall see if they step up to the plate.

As someone who reads a lot about the British Film Industry, this is a fine companion to Icons on Fire: The Decline and Fall of Almost Everybody in the British Film Industry by Alexander Walker where the few people in power totally screwed it for everyone else. Shame really as there is an abundance of talent out there waiting to be recognised. At least for the ones that haven’t hoofed it to the States.

The main reason I found this eye opening and writing from a personal level, I applied to a great many funding bodies over the years and had I known then what I do now I wouldn’t have bothered. What’s the point if the cards are marked against you? What is the real point if the funds are going to their friends? Energies are best spent going after private funds like Kickstarter, especially if you are far from privileged or connected.

I know there are some people who will shout Kidulthood but these are in the minority (pun city!) and more films such as this should be championed. All said and done the shining light in all this (among a slim few) is Warp films making truly British films and creating a filmic legacy that will last years. What is needed is more of that.

The roll call of respected Industry Professionals that have been interviewed is impressive and all speak of the problem and this documentary is one big action plan for change.