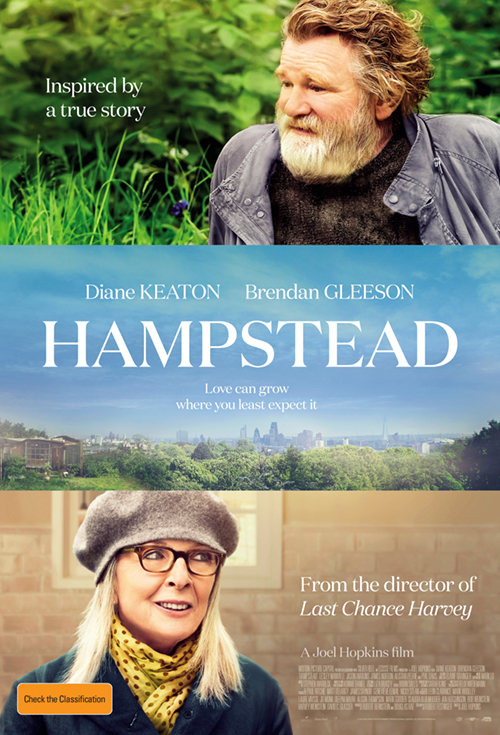 American legend Diane Keaton stars alongside Brendan Gleeson and Simon Callow in this British story loosely based on the life of Harry Hallowes known as the Hampstead Heath squatter. Just like THE LADY IN THE VAN, also based on a true character, eccentricity and social responsibility have always been very strong British themes. However without a Diane Keaton, this film would never have been released in the cinema, but once the stars were part of this deal Entertainment One (the distributor) could afford to opt for a very simple story made interesting by the high quality acting on display. With very little media buzz surrounding this film, Entertainment One may have been hoping for a low risk roll of the dice which may catch fire like a MANHATTAN or a NOTTING HILL. Their risk would have been further minimised by the UK film tax credit which gives grants to films shot within our shores and this all takes place in London’s sought after location. All the stereotypes are recognisable and portrayed well but also, the film’s director Joel Hopkins opts not to patronise the audience in what is clearly a painting by numbers exercise since HAMPSTEAD is only going to appeal to the  middle aged and older like me. 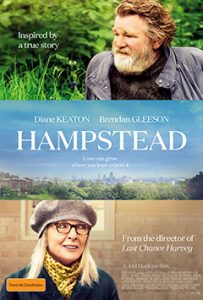 When widower Emily (Keaton) inherits the financial mess of her late cheating husband, her aching heart is drawn towards a self sufficient social outcast Donald (Gleeson); but despite residing near the grave of philosopher Karl Marx, the gentrification of the Heath threaten Donald’s self made abode upon much wanted land. And so English judge (Callow) has to decide between the rights of man versus real estate property developer.

Hopkins raises a most interesting dilemma in today’s society: should money give anyone permission to do whatever he or she wants? Just as film director Stephen Frears remarked in the documentary WHO KILLED BRITISH CINEMA? – All the trouble in the economy goes back to them ( Thatcher and Blair), they brought in such dreadful values!

I think it would be useful for younger people to watch HAMPSTEAD purely on the basis of comparing it to our attitude towards the epidemic of homelessness plaguing our streets in the UK today. When I was growing up in Birmingham in the 1970s and 1980s, it was shocking and unacceptable to see anyone without shelter. What’s interesting also about Emily and Donald is that as individuals, neither has money and neither has love. Give it a go !