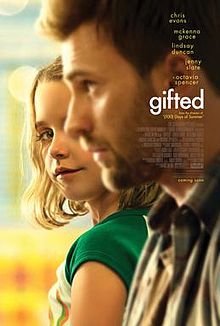 GIFTED stars CAPTAIN AMERICA’S Chris Evans, Octavia Spencer and with child actress McKenna Grace who is beautifully directed by Marc Webb (500 DAYS OF SUMMER). Frank (Evans) is Mary’s (Grace) uncle having taken in the seven year old child prodigy after her mother’s suicide. And just like her mother, Mary is a mathematics genius with very little else in the form of friends, adventure and creativity. Frank recognises this having lost his sister to the dark matter of maths but Mary’s teachers and grandmother believe she is not served by conventional education. Herein lays the main dilemma of the movie: should Mary be integrating with children of her age or should she be locking horns with MIT professors? For Frank it should be the former but for his mother, Mary’s grandmother, it should be the latter.

When over fifty per cent of marriages in Britain fail, another interesting theme that arises from GIFTED is how often are children pawns in the selfish needs of adults? And just how often are these needs excused in the subconscious thought:

“I’m doing this for the kids”. When really it is for oneself!?

GIFTED is more KRAMER VERSUS KRAMER than SEARCHING FOR BOBBY FISCHER and hence may be more refreshing to audiences that haven’t seen these films before but older audiences can still enjoy fine performances and good direction despite Lindsay Duncan’s portrayal of the grandmother, Evelyn, being perhaps too heavily laden towards the ice queen of Narnia and it is this character in particular that could have been opened up more for us to engage better with the whole fractious family complication. Also, Frank’s dependency on his neighbour played by Octavia Spencer, for much needed respite from the rigours of single parenthood should have been explored more to highlight his limited resources to give the child the very best start in life despite the very best of intentions. Emotional.